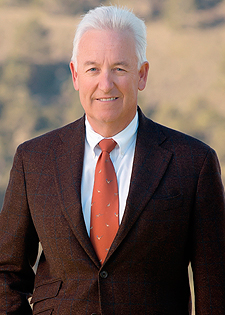 Tony was raised in Monterey where his family owned and operated golf courses and hotels.  Tony attended York School, graduating in 1975, and he received both his Bachelor of Science Degree in Political Science (1979) and his Juris Doctorate (1982) from Santa Clara University.  Since he began his practice 30 years ago, Tony has represented clients in a wide variety of real estate issues throughout Monterey, San Benito, Santa Cruz, and San Luis Obispo Counties.  Tony has extensive experience practicing before the California Coastal Commission and has a reputation as a fierce and successful advocate for his clients.  Prior to starting his own law firm in 1994, Tony was a partner in the firm of Noland, Hamerly, Etienne & Hoss and has concentrated his practice in the areas of land use permitting, real estate acquisition and sale, as well as litigation related to real estate.  Tony also assumed the roles of President and Chairman of the Board of his family’s golf business at Rancho Cañada Golf Club in Carmel Valley in 2005.  In his spare time, Tony owns and operates one of Monterey County’s largest cattle ranches, and he and his wife, Susan, enjoy hunting, fishing, sports cars, and travel.